If you wish to improve, be content to appear clueless or stupid in extraneous matters – don’t wish to seem knowledgeable. And if some regard you as important, distrust yourself.

In his commentary on this passage, Ryan Holiday comments:

One of the most powerful things you can do as a human being in our hyperconnected, 24/7 media world is say: “I don’t know.” Or, more provocatively: “I don’t care.” Most of society seems to have taken it as a commandment that one must know about every single current event, watch every episode of every critically acclaimed television series, follow the news religiously, and present themselves to others as an informed and worldly individual.

That is exactly how many people attempt to present themselves on Facebook and other social media. But to do so involves spending (i.e. wasting) precious hours of one’s daily life watching TV, reading news articles and checking what the key commentators think about each issue as it is picked up by the media. So much time spent on things we have no power to control! What utter and foolish vanity. 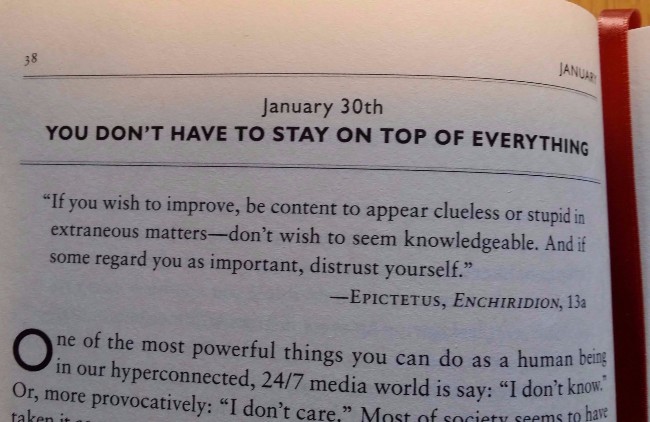 The Daily Stoic And The 4-Hour Workweek

Ryan Holiday is not the only contemporary writer to have seen the folly of attempting to “be seen to know.” Tim Ferris devotes a whole chapter of The 4-Hour Workweek to the topic of “cultivating selective ignorance,” which is a nice way to put it. He writes:

Most information is time-consuming, negative, irrelevant to your goals, and outside of your influence.

Consuming information in this way also drains you of the energy you need to pursue the things that really matter in your life. In The Daily Stoic Ryan Holiday challenges us to reconsider what we focus on by asking some key questions:

How much more time, energy, and pure brainpower would you have available if you drastically cut your media consumption? How much more rested and present would you feel if you were no longer excited and outraged by every scandal, breaking story, and potential crisis (many of which never come to pass anyway)?

I began reading The Daily Stoic on 4th January, when the book arrived in the post. So far I have read the daily portion each morning since then. “You Don’t Have To Stay On Top Of Everything” is the one that has stood out for me so far. It confirms my own increasing movement away from consumption of mass media channels. Instead, I aim to be more closely focussed on my own goals, on the things that I have some control or influence over.

One example of this happened during the Christmas and New Year holidays. I noticed that I hadn’t automatically turned on the BBC World News at lunchtime as I used to do when getting lunch during the week. I decided to see if I could turn that accidental change of habit into a permanent habit of NOT watching the BBC news through 2017. So far, I have only turned on BBC World once this year. That was just for five minutes to watch the inauguration of the President of the United States of America (whose name escapes me right now). Five minutes was enough.

Finding The Daily Stoic Via The School of Greatness

On the other hand, I make a point of listening to inspiring presenters such as Lewis Howes. Nowadays I spend my Tuesday evenings cooking dinner while listening to Lewis’ YouTube channel, The School of Greatness.

Here is the author of The Daily Stoic, Ryan Holiday in conversation with Lewis Howes on The School of Greatness:

The Daily Stoic is divided into three four-month sections. They cover the three Stoic disciplines of perception, action and will. There is a six-page introduction that shows why the Stoics are relevant to us today. There is a useful glossary of Stoic terminology and suggestions for further reading.

The Daily Stoic by Ryan Holiday and Stephen Hanselman is available on Amazon.com. The hardback edition is nicely produced, with a sewn-in book ribbon. It is also great value at just $15.00.