In Britain, many people send Christmas cards to their friends and relatives. They send them from late November until just before Christmas Day, 25th December. How and when did this tradition begin?

The first Christmas cards were sent over 150 years ago, in Victorian times. People began sending cards to friends and relatives.

The first person to send a Christmas card was a man called Sir Henry Cole. He was very busy and did not have time to write to friends at Christmas, so he asked an artist to design a card for him. The artist was John Calcott Horsley (1817-1903).

The card was printed in black and white and then coloured by hand. 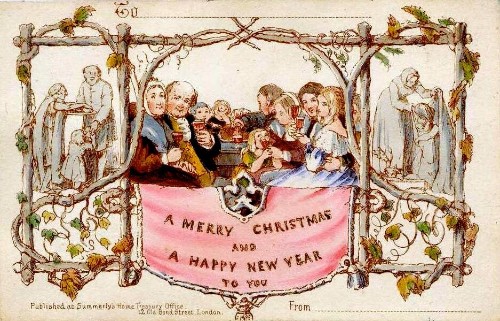 On the front of the card there is a picture of a happy family. Each person in the picture is holding a glass of wine. On either side there are pictures of people giving food and clothing to the poor. There is a message on the card, beneath the family. It says,

“A MERRY CHRISTMAS AND A HAPPY NEW YEAR TO YOU.”

A thousand copies of the card were made. The cards that Sir Henry Cole did not need were sold for one shilling each. They sold quickly, and a new “tradition” was born.