The port of Sasebo is four stops up the line from Huis Ten Bosch. We took the hydrofoil from there across to Kamigoto, the main northern island group of the Goto island archipelago.

We hired a car and spent the late afternoon and the next morning driving around (sometimes round in circles thanks to the on-board navigation system) looking at several little churches that dot the island in far greater profusion than just about anywhere else in rural Japan. There were many “hidden Christians” who practised their religion in secret on the Goto islands, but when the ban on Christianity was lifted Roman Catholicism returned to the islands. Today most of the Christians on the islands are Roman Catholic and the “Karure Kurishichan” sub-culture is almost forgotten.

A lot of the churches were recently built using modern materials, but there are several older churches which were built in the early twentieth century of wood, brick and, in one case, of stone. 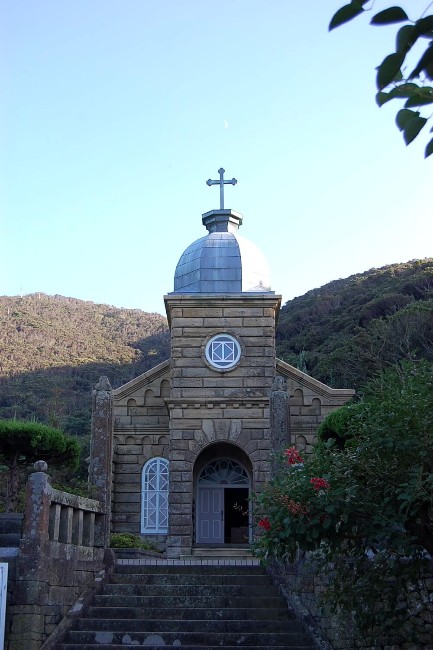 Our first trip was to a small island called Kashiragashima, which is linked to the main island by a red iron bridge. Kashimagashima Church is the one church that is made of stone. It is a small building with a low tower over the central portico that is capped by a small dome. It was completed in 1919, the eighth year of the Taisho era and is located in a beautifully tranquil setting.

The doors of the church were open but we did not go inside as couple of elderly ladies were chanting.

It was a beautiful evening, sunny still, but with the cresent moon had risen and hung above the cross that topped the tower of the church.

The church was just a few yards from the sea, and further down the lane, right by the little rock-strewn sandy beach, there there is a Christian cemetery that overlooks the sea.

After reluctantly leaving Kashiragashima we travelled west to look at another church, which was shut, and then went in search of a good restaurant. Not much seemed to be available so we drove back to our hotel, only to discover that what we had thought was just the hotel breakfast room turned out to be one of the best izakaya on the island! The fish was fantastic – we had the plumpest, freshest Japanese mackeral (sanma) that I’ve ever seen.

Next morning, we visited a couple more churches.

Happily, they were both open.

The first was a brick church on a hill which overlooked a small fishing harbour.

The second, our last siteseeing destination of the trip, was a small wooden church with a brick portico and tower at the “west” end and a small wooden porch giving access from the “south” (at least from the point of view of church architecture – the shadows cast by the morning sun suggest that the church is aligned with the altar to the west). 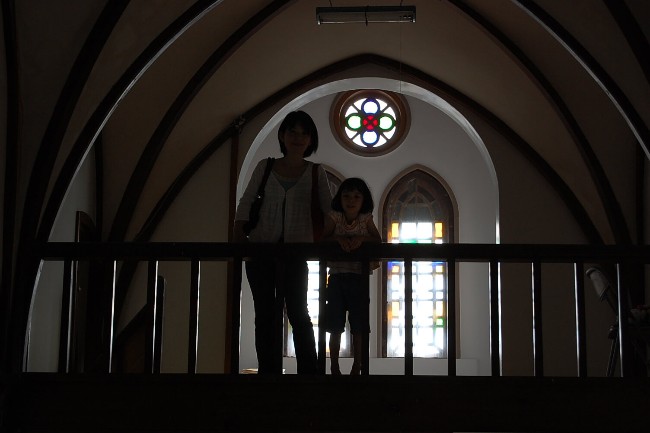