I spent the day playing golf with Jaime at the Forest Hills Golf Club near Hiroshima Airport. The golf course is so near the airport that as we attempted to blast our balls up the fairway we could see an aircraft readying itself for take-off just beyond the trees behind the green.

I shall spare the details about our progress around the course as Jaime has dwelt on that in more detail on his blog. The course itself is very pleasant indeed, designed by an American geezer who doesn’t hesitate to take all the credit for the club’s success. What we appreciated most though, were the beer machines half way round the “in” and the “out” halves of the course. (Once again, we were sent around arse-about-face, which is a good thing because that way I can avoid the embarrassment of being observed…)

We went in for lunch after nine holes, as is the custom here in Japan, and were served by a cute waitress with very nice legs and a certain facility with the English language honed at Nova.

I wonder who her teacher was….

Our rate of progress around the first nine holes was not swift to say the least. What with our treks into the undergrowth to seek out lost balls, the leisurely break at the beer machines, and the general incompetence and the hacking and the slashing and the swearing and the cursing it looked as if we would have to hurry our lunch… But half way through our prandium the golf course was hit by a rain storm, thunder, forked lightning, the works, so the second half was delayed by about forty minutes.

I was looking rather disconsolately at my score card when Jaime helpfully pointed out that “any score over ten counts as ten,” which happily brought my score down below – well whatever, but it was still in three figures.

Back in town, Jaime retired sick from suspected food poisoning – had that leggy waitress resented being chatted up and laced his lunch?

I got to Kodama at 7:30pm and played three games with Noda and Kenyon. Noda took the first game, entirely at Kenyon’s expense, but then he went quiet and gave away much of his early winnings to David. However, he called for some shochu and suddenly his game took off. It took a while, but he went out as Oya on Tsumo, Kokushimusou, robbing David of all his winnings hitherto plus quite a lot besides. Despite getting hit along with David, Kenyon managed to weather the storm and finished in the black on +1. Just as Noda hit his stride a Japanese couple came in and greeted Kenyon – it turned out that the bloke, Hide, an aquaintance of Kenyon’s, had come along to join in… and it was just at the moment when we had an audience that Noda put together some more arse-kicking hands and then retired for the evening on +87 which now puts him on +788 for the year, well beyond the reach of the rest of the pack. 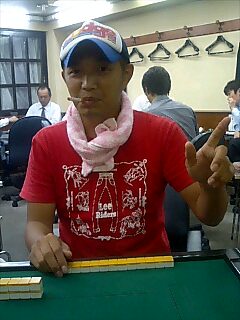 So Noda left and Hide (see photo) took his place at the table. David had intended leaving with Noda – it would have been wise since bed was beckoning after a day on the golf course… I don’t know which game is more punishing to the player who loses concentration – golf probably because the results are immediate and devastating, whereas in mahjong you can sometimes get away with it! What I do know is that golf is an exhausting game – not physically but mentally, at least for an incompetent player like myself. Anyway, with the beer flowing, The Poor Little Cypriot was born up for a while on a bubble of conviviality and generously gave away several tiles for Pon or Ron to The Human Computer who, with Noda gone, came into his own. Hide, perhaps new to our style of play, got hit from both sides of the table and ended his first game on -73, but whatever The Poor Little Cypriot had won off Hide he promptly gave to Kenyon, and some.

Another beer was called for and David enjoyed something of a revival, going two games as the only winner and clawing his way back towards parity.

But it did not last and the last dregs of vitality drained away as Kenyon won the seventh game outright. Worse was to follow for The Poor Little Cypriot. Hide, having by now got used to us, suddenly took off! He won three games on the trot and took Kokushimusou off David and all while merrily chattering away to Mama-san sixteen to the dozen. By the time his run had run out of steam he had gone from -102 to +12 and looked set to enter the Accumulated Results Table in second place!

Then, when Hide’s run was over, and David’s eyes were glazing over, Kenyon, who had kept his losses to Hide within reasonable limits, promptly won the last two games, finishing each one on +37 and completed the fourth Kokushimusou of the evening to push Hide back into the red. On the Kokushimusou front the results for tonight were not friendly to The Poor Little Cypriot!

It had been a long day and a longer night. Seven hours at the golf club (including lunch, storms, beer breaks and the hot bath at the end, I hasten to add), followed by over eight hours and 11 games at the mahjong table. Somewhere between the two events I had mislaid my golf shoes… a bad omen if ever there was one!