Kodama was packed tonight, with five tables busy and the atmosphere thick with smoke, just like it used to be every Friday a few years ago. I wonder if mama had expected them because she had made some extra good side dishes for the drinks. This is what I got with my first beer while waiting for Noda and Ray to arrive: 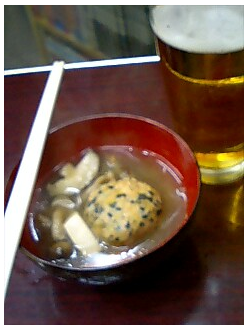 A chicken and herb meatball in soup with mushrooms, carrots and so forth, served hot, with beer.

A few minutes later my “yakimeshi” arrived. I mention this dish quite often, and here it is! Fried rice with chopped veg and meat, and a side dish of miso soup with egg. DELICIOUS! OK OK, not the greatest pics in the world but they were taken with the farty little camera on my mobile phone…

Ray ordered the same dish when he arrived. Then, along came a dish of stewed beef and white radish with the second beer – another winner! Finally (yep, only three beers tonight for me), a dish of peanuts supplemented with choco-filled biccies. Not a bad spread.

Anyway, down to business.

Because there were only three of us (Jaime is on holiday; Kenyon cancelled due to circumstances beyond his control; Eri had a fever) the games rattled along with the Poor Little Cypriot finishing the first four as the only winner which enabled him to wipe out his deficit on the Grand Accumulated Results Table.

Tonight saw two Yakitori boys fail to win a single hand in a game, Noda in the second, Ray in the fifth. Noda was last Oya and the two foreigners agreed that one of them ought to complete a cheap hand quickly to leave Noda skewered. The PLC was once again approaching Tenpai when he threw out the 1-Coins and Ray declared:

You can’t get much cheaper than that! In cash terms I paid out a measly 30 yen to reap Noda’s 200 yen fine. Well worth it!

Actually, I told a bit of a fib when I wrote just then that Ray said, “…nashi nashi.” It was actually one of the old geezers at the table next to ours who said it, but Ray did say he would use that form instead of our customary “den den” when counting the two extra points added to every score.

(Note to visitors to this site: Japanese mahjong has an alternative, easier method of calculating the score as well as the standard complex counting method. You always add two points to find the correct score and as you count you name the Yaku, count the bonuses and then finish with the two points, saying “den den,” or in the case of our neighbour, “nashi nashi.” Got it?)

There were at least five Kokushimusou near misses, with Noda and Ray waiting on Tempai on one occasion each. I don’t know how many times Chitoi (7 Pairs) was the winning hand but it was a lot.

There were not so many long Oyaships and only a couple went to Ryanshi, both times with Noda as Oya. However, it was only in the last game when Noda broke through, racking up five 100-tenbou, pipping the PLC to completion on Tsumo just after he declared Riichi on the fourth. But the PLC claimed Noda’s tile on the fifth hand of the Oyaship to win back a bit of his mula in that game.

Ray found himself running out of time to get rid of his Yakitori in the South round. Ray was second Oya and after Noda’s run was over Ray hoped for an end of session revival (the famous “Ray Revival”) but it was as fickle and fleeting as was the looked for postprandial Yakimeshi Inspiration. Ray’s last Oyaship came to a swift and cheap end when he threw the 2-Bamboo and the PLC declared on the final Chitoi hand of the evening.

However, Noda was the only winner of the last game, and that one victory of his evening got him into the black, mainly at Ray’s expense, although when I got home tonight and did all the calculations I discovered that Noda had done just enough to keep the Poor Little Cypriot out of the black on the Grand Accumulated Results Table despite his final score of +108 for the evening!

The reckoning for tonight’s session:

Noda and I trotted off to the carpark and Noda dropped me off at Nishi-Hiroshima in good time for the last tram.

Now that Ray has moved out of town into a staff flat for which he pays a peppercorn rent he finds himself flush with cash despite subsidising the other players’ evening. Off he strolls as happy as Larry to his hotel on Peace Boulevard!

All told, an excellent evening.