Jaime and I spent the early part of this evening up at the Mitaki golf practice range in preparation for Tuesday’s round of golf at Forest Hills. More practice is definitely needed, and more time reading David Leadbetter’s “The Golf Swing”.

We met up again at Kodama jansou and were joined by Noda for the first three games. Noda won the first one outright, came top in the second with Jaime taking second place in the points. In the third game David recovered his second game losses and came top while Noda finished in the black and Jaime sunk to -70 and was stuck with his Yakitori.

By this time Kenyon, Hide and his girlfriend Yuri had arrived. We invited Yuri to play and make two tables of three players but she preferred to sit out as she is but a neophyte in the mysteries of mahjong. Rather than play with five players we have recently preferred to have one player drop out for a game, usually the second placed player in the previous game, so Noda (sitting pretty on +98) sat out of the fourth game and Hide and Kenyon slotted themselves into the table.

The fourth game went to Jaime, which halved his deficit at that stage of the evening. That was Hide’s first game of the evening and he had provided most of Jaime’s points. Hide warmed up in the second game and came top to bring his score back to zero. Noda crept over the bar to put his score for the evening over 100 points.

Noda stayed for one more game, and gave back a mere three points to finish the evening on exactly +100 thereby extending his score for the year to +888 as we approach the last quarter! Thus, despite Kenyon adding to his score for the evening by winning the sixth game, his ambition to “catch Noda” appears to be no more than a passing dream or, more worringly, a delusion of grandeur. Catch Noda before the year is out and I shall speak Dutch throughout 2007! (Mind you, Noda went wobbly in the last quarter of 2006 and dark rumours of Noda’s having “lost it” began to circulate…)

When Noda called it a night the score sheet stood as follows: 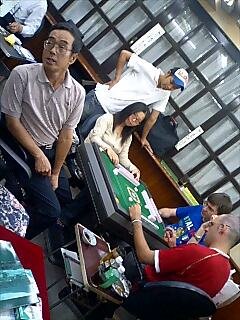 As can be seen, Hide was not soley responsible for the -8 points on his part of the score sheet. Yuri played some hands in Hide’s place. Hopefully she will soon feel confident enough to play under her own banner. Anyway, we are very pleased to have some fresh faces at the table.

After Noda left David staged a late and beer-sodden revival, remaining Oya long enough to force Ryanshi until Hide took 9,000 points off him on a Honitsu hand when he threw a 3-Coins. (David’s choice was either 3-Coins or 3-Bamboo to go Tempai on a Chitoi hand.) This result recouped all David’s losses and put him above the bar and as it was 3am he decided to cut and run and headed out into the pouring rain in search of a taxi and with the help of an abandoned umbrella…

One more hand was played after David’s departure and it went to Kenyon, so the final results for the evening looked like this: