I didn’t play mahjong tonight because I was out celebrating the end of term with some of the TOEFL girls who I teach Friday evenings, and one of my “English Presentation” students, as well as Miree, a Norwegian of Korean heritage who was visiting Hiroshima for a few days. 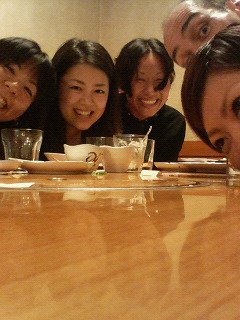 Because Miree speaks no Japanese the girls had to practise their English and were very keen to do so. It turned out that one of my students shares Miree’s Korean heritage and was especially excited to speak to her. Her grandparents “came to Japan” (that was the euphemism that was used in English and Japanese) during the war… Miree asked her which was her first language, Japanese or Korean and she hesitated for a long time before putting on a sweet smile and saying “Japanese”. Both my student and Miree are heading to Korea for their first visit this summer (although Miree was born in Korea she has no memories of the country).

The first year contingent got up some Dutch courage by working their way through the cocktail menu and their faces got redder the more they drank.

Meanwhile, over at the mahjong parlour Noda was once again extending his lead over the rest of the pack although he might have been finding it more difficult to handle the tiles and “read” their faces as he lost part of a finger in an industrial accident at work earlier this week. Apparently he failed to withdraw his hand from an industrial vacuum machine before the door shut and had one of his fingers off.

At least, that is his story, but finger lopping is a form of punishment that the local Yakuza is notorious for dishing out to recalcitrant parties…

The saddest thing about it is that he will no longer be able to play the guitar and will have to retire from his band.

Nevertheless, Noda’s lack of finger did not prevent him getting ahead. Tonight’s game was between Noda, Ray and Jaime. Kenyon was partying out in Saijo – a place not usually associated with partying except for the annual sake’ festival in October…

Ray managed to claw back some more ground despite committing a massive Chombo in one game in which he went Riichi on a 7-Coins wait, despite having discarded two of them himself!

Jaime, meanwhile, continues his competition with David for the worse run in the recorded history of the Cockseye Club and has now fallen so ignominiously low as to be below Tim…

The players stopped around midnight so neither Kenyon nor I got to play.

Miree, my “Presentation” student and I left the izakaya to meet Ray in Kulcha. My student was particularly excited as Ray used to teach her when she was at high school – Ray is held up as something of a cult figure among Hiroshima school girls…

Miree is an artist who, in her short stay in Japan, has developed a penchent for Japanese businessmen. She is also keen on photographing people’s feet, so it was not long before most of the men in the bar were standing around barefoot while she clicked away.

It turned into a long night… too long, in that I got back home just a couple of hours before having to go out and teach a make-up class – not cosmetics, but a class that I missed back in April… however, I slept right through my alarm and woke up at 9:15, a quarter of an hour after the class had begun… Doh!