Last night’s game of chess against Dr M was one of our more satisfying encounters as neither of us made any outrageous blunders until Dr M moved his Knight to d4 at the end of the middle game. Careful opening moves led into a sharp middle game and, from my point of view, a satisfying “sham queen sacrifice” finish. 🙂

The diagram on the left shows my opening formation as black. The Queenside fianchetto and the absence of advanced pawns suggests a variation of the Queen’s Indian Defence, but with the black Bishops traded early in the game and a Knight on e7, it seems far from “orthodox”.

A series of middle game exchanges left me with a Rook-versus-Knight advantage in material and with a better position which I tightened up preparatory to the end game, which I suppose was really the late middle game, when the end came.

The next diagram shows the point when I felt confident that I would win.

The key to White’s defence is the Knight, which is protecting f2 but is itself only defended once while under attack from the Rook and Queen. Even if White tries to save the Knight with R-e3, it will still fall as White wants to remove the guard from f2.

The only other option for White seems to be to give up the Knight and advance the pawn to f3 while going one whole piece down.

In the end, Dr M advanced his Knight to e5, and I replied with Q x f2+ and set myself up for a “sham queen sacrifice”. I flipped the board to show my point of view in the game: 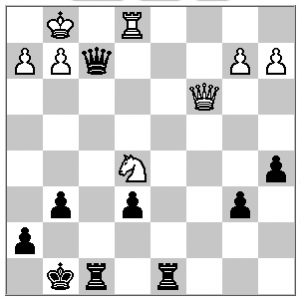 After the game Dr M said he felt “one move behind” throughout. It did not quite feel like that to me when my Queen was being threatened by his white-squared Bishop, but I survived, got the better of the exchanges, had an army that was easy enough to reorganize, and a fairly clear idea of what to do, helped by my recent reading of Jeremy Silman‘s The Amateur’s Mind: Turning Chess Misconceptions into Chess Mastery

. “Mastery” is still a long way off for me, but Silman is helping me to play with a clearer sense of what I am trying to achieve. It is very satisfying actually to be able to achieve it from time to time, even if against an opponent with much less experience (but with a background in shogi ).