In chess, Ablenkung is the art of luring your opponent into removing a piece from an advantageous position so as to give yourself access to a file, row or area of the board of vital concern to the outcome of your game. What is the best way of doing that? By setting up a distraction, which is “Ablenkung” in German (also translated as “deflection”).

. The German title is Zauberwelt Der Kombination and it is one of the three chess books in my possession, and one that has sat largely neglected on my bookshelves since 1988, complete with German translation notes from the first few pages.

There are pencilled ticks against the problems that I was able to solve all those years ago. I didn’t get beyond the first chapter and solved just three out of seven Ablenkung problems. My problem in those days was precisely that I was too much subject to Ablenkung in my own life to stick to anything or anybody for very long.

Here is one of the problems from that chapter, an excellent illustration of a missed opportunity for “Ablenkung” in a game between Hübner and Murei played at Suchumi, on the Black Sea coast of Georgia back in 1972 when Georgia was part of the USSR. I don’t feel so bad about not being able to solve this problem back in ’88 because Huebner blew it as well, as Neistadt explains,

What is the best move for White? 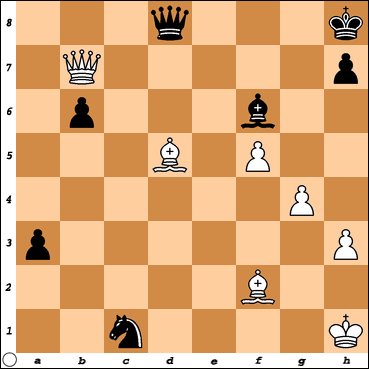 Feel free to post your solution or pithy commentary in the “comments” section at the foot of this post.