I felt something like old Banquo when I woke up from an afternoon snooze: a heavy summons lay like lead upon me and I would quite happily have slept for another couple of hours.

The leaden feeling lasted all evening. Brutus-like, I was not gamesome and every time I made a hash of my tiles or every time the turn of the tiles went against me it only confirmed that I ought to have stayed in bed and slept through the evening.

There were only three of us present tonight – the three players who are currently in the black on the Grand Accumulated Results Table: Jaime, Noda and David. Actually, there was a fourth player but she was not in the mahjong parlour and contented herself with buzzing Jaime’s mobile phone every five minutes. Tim also popped in for a beer and a chat with Kenyon – who was not there.

Tonight’s results reconfirmed the current form and so the mahjong table appears to be modelling itself on the theory of the expanding universe.

Jaime won the first two games. The feeling David had during Tuesday’s game at the Mogamis’ continued tonight as Jaime, fiddling with his telephone, would suddenly go out just as David was thinking that the game might go to him! That was how the first game ended.

The second game started of with a sudden dramatic turn. David’s second discard was Hatsu. three turns later Noda also threw out Hatsu and Jaime declared Ron! He turned his tiles over to reveal Kokushimusou – one of the fastest ever completions of that hand. 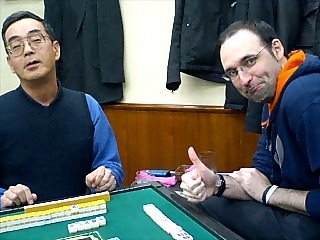 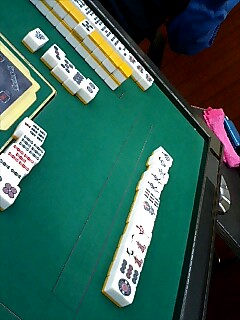 That result set jaime up nicely for the second game and he finished on exactly +32, (i.e. with the 32,000 points he received from Noda still in his tray) which was enough for him to finish as the only winner of the second game.

However, Noda was getting into the groove of his game and he came into his own in the third game and even went out on Kokushimusou on the 9-Coins. Jaime had gone Pon and Noda plucked the 9-Coins from the wall which perhaps saved David – who missed his turn – from having to pay the whole bill. Actually, it would have been much worse if David had drawn and thrown the 9-Coins because Jaime was Tempai again with Toitoi, Honitsu and 2 Dragons, waiting for… 9-Coins. That would have been a very painful Double Ron indeed! And David had to admit, looking at his tiles, that he would have probably discarded the 9-Coins had he drawn it from the wall. As Oya Noda won 48,000 – and was the only winner of the third game.

That was the only game in which Jaime suffered. It completely reversed Noda’s fortunes as he went from -34 to +34. David’s mediocre performance continued. Not so dire as to end up with his Yakitori on the table, but even successful hands were piddling affairs.

Jaime had only just managed to stay in the black but recovered in the fourth round to reclaim the lead over Noda. David, as starting Oya in the fourth, was beginning to anticipate a revival in his fortunes as he built a reasonable hand with a three tile wait – only to see Jaime go out on Suuanko. Then, in another hand of this game, David made the common error of failing to collect a tile from the back of the wall after declaring a Dora. Now, Jaime had made a similar mistake in an earlier game, but in that game he had managed to maintain a threatening posture, with three bonus tiles and an open Dragon on view. David had nothing to offer but a crumpled posture and a resigned tossing out of three East (not active) tiles in a row as he watched a nice series of Bamboo tiles fill up his 12-tile hand… So, far from seeing a revival, David’s fortunes continued to worsen – each game had finished worse than the previous one. This time, David was the only loser, whereas until now he had always had someone to share the misery with.

Finally, in the fifth game, David made a consolatory recovery. His best hand of the evening, won from Noda, was a combination of Shosangen and Honitsu, but by the end of the evening the current form of the players was reconfirmed and David was the only loser for the evening, on -48.

Still, on the other hand, we wrapped up the session at 11pm so the trams were still running and David saved himself a 3,500 yen taxi ride home. A victory of sorts!

So, while David manages to stay in the black on the Grand Accumulated Results Table, Noda advances a little, and Jaime extends his lead. The universe is expanding.