On Friday 5th October we packed everything we needed for a two-night camping trip to Tsutsumigaura Campsite on Miyajima Island.  Camping on Miyajima is usually pretty easy for us. Miyajima is just a short tram and ferry trip away from where we live in Hiroshima.

My daughter, Eileen, of course wanted us to take the big tent and the camping table and chairs even though the two of us would have to carry everything as the Mrs was away that weekend and the car was being serviced. Camping trips are of two kinds: either you take as little as possible and go back-packing, or you fill your car up with stuff and drive. In our case, camping on Miyajima with no car, it was a matter of loading the tent and camping table into a suitcase, and the rest of the gear into my rucksack. Eileen wanted to take her own suitcase rather than a rucksack, and we each had to carry our own collapsible chair. I strapped the fold-up sleeping mats to the outside of the suitcase as there is no room for them anywhere else… 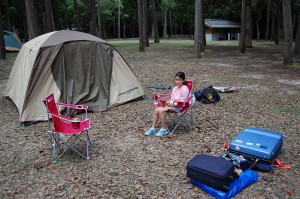 Thank goodness Eileen’s ballet class finished early and she’s back at home by 3pm. We set off for Rakurakuen tram stop around 3:15pm. It is not so difficult to push or pull the suitcases on their wheels for the five minute walk to the tram stop. The tram is a “Green Mover Max” with a floor that is level with the platform so we don’t have to heave our suitcases up any steps to board the tram.

At Miyajimaguchi the ferry terminal is just across the road from the tram station. We tug our suitcases up the ferry ramp and park ourselves in the car bay. There are no cars, just a young guy on a skateboard to keep us company on the ten minute crossing.

At Miyajima ferry port we catch a taxi to the campsite and after checking in at the camp centre, the driver takes us all the way to the camp site. The suitcase camping trip has started off without a hitch! 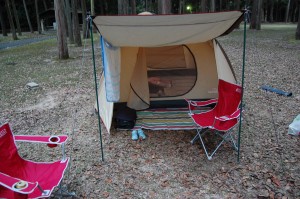 Twenty minutes later we have the tent up and the folding chairs set out (see photo, above) and the first cleansing beer of the afternoon cracked open (see can of Yebisu in the “drink pocket” on the arm of the vacant chair).

A quarter of an hour later and the tent is completely set up, with a “genkan” (entrance area) and an awning. The extra “protection” in the form of a hanging towel is Eileen’s contribution to the set up (see photo, right).

It was perfect autumn conditions for camping, dry and sunny, with the trees of the wood we were camping in providing plenty of shade.

The woods were also riddled with deer, and the deer were very keen on getting any food that was available. 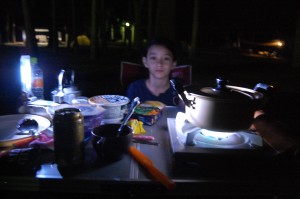 Dinner that evening was very basic! Instant egg soup followed by pot noodles! Udon for Eileen and ramen for me, using a gas ring for our cooking.

After dinner we retired into the tent and played cards until Eileen fell asleep.

I then spent the rest of the evening checking my email and reading an article by Jason Fonceca – one of my online friends – on my tablet, and reading Hilary Mantel’s Wolf Hall on my new Kindle. (I’ll write a review of the Kindle in another post, and a review of Wolf Hall if I can get around to it…)

Sometime during the evening I heard a rustling outside the tent, but did not take any notice of it. The next morning I discovered that the plastic bag of empty beer cans and the plastic bowls and wrappers from the ramen and udon instant meals had disappeared from inside the closed awning of the outer tent… One of those pesky deer had smelled the ramen and udon residue and had pulled out the bag and disappeared with it. There was no sign of the bag anywhere! 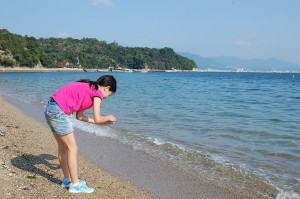 It was a lovely sunny day and we decided to catch a bus into town and rent a couple of bicycles.

As we had about 2o minutes to wait for the bus, Eileen went down to the beach to search for shells which she wanted to use in a school project – as learned a few days later when she brought the finished product home from school!

When the mini bus arrived we hopped on and I told the driver we were going to the port… No response! He sat in his seat like a fossilized statue, with a medical facemask slapped over his chops just to accentuate his anonymity. He didn’t move. He didn’t ask for any cash, even though there was a sign on the door telling passengers to pay up front. He didn’t even seem to move when the bus pulled off and headed back towards the port. Was the bus automated and supplied with a dummy driver? When we hopped off at the port he did manage to reach out a claw to take the money I put in the cash tray, but then, if you have the technology to automate a bus, adding a robotic, money gathering arm to a dummy driver would not be difficult.

We were both hungry when we got off the bus as breakfast had consisted of nothing more than egg soup and coffee, so we popped into a cafe just across the road and down a bit from the port for strawberry jam on toast and a glass of orange juice. I asked the lady who served us where we could hire bikes and she pointed us back to the ferry port.

At the ferry port we could see no sign of any bicycle rental service and asked at the information kiosk. The woman there pointed us to the Hiroden ferry ticket office. The woman at the gate waved us through to a young employee, who told us they didn’t have any bikes for children. No bikes for children? I looked at him as if he were nuts until he suggested that “the other company” might have children’s bikes, so we went across to the JR ticket office, just as a ferry load of tourists were disembarking, so we waited for ages while a seemingly never-ending crocodile of people sauntered through the ticket gate. Then I told the girl at the gate that we’d like to rent bikes and she pointed us around to the back entrance, so around we went and came across a little old fellow in the office who had one child’s bicycle and a few adult bicycles to rent – finally! 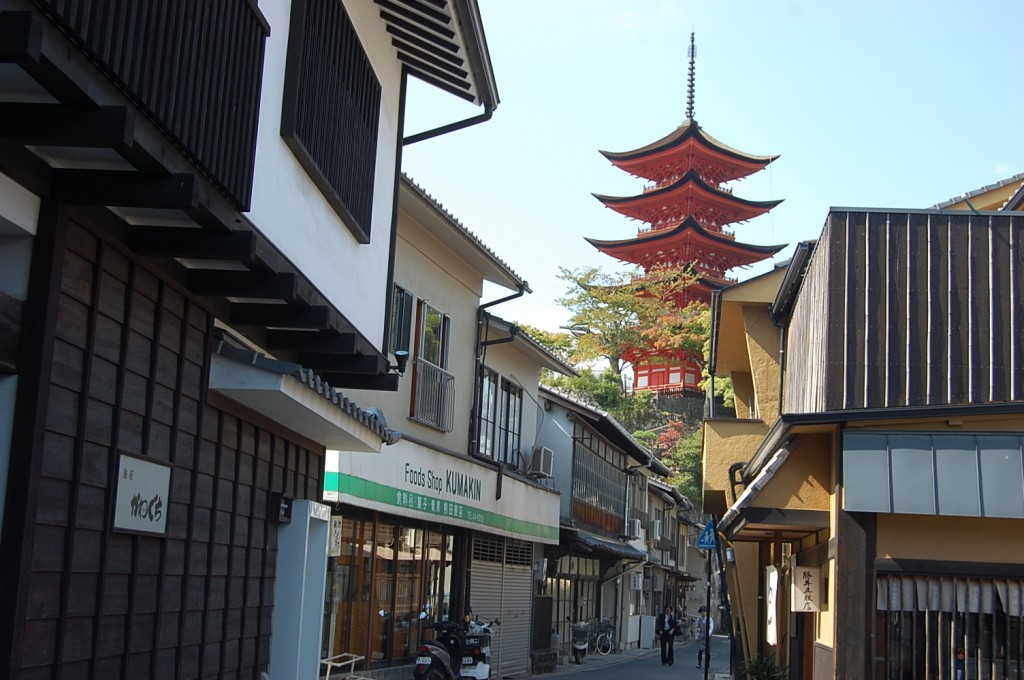 Off we went on our bicycles, mine was a regular “mama-chari” – a typical Japanese-style upright bike with no gears and a wire basket on the front. We headed past the cafe were we had had our toast and off towards the shrine, but not wanting to get stuck in the crowds we went up a side street and along the back streets, which took us towards the back of the pagoda (above) where we had to wait outside a cheerful old lady’s souvenir shop for the motor vehicles, which converged on the narrow corner from three directions, to pass.

We headed round the back of the shrine and up towards Daishoin Temple, making a few detours around various backstreets on the way.

I had thought that we would have lunch at a restaurant somewhere and return to the campsite for the evening meal, however, Eileen wanted to have both lunch and dinner at the tent. I realized then that for her the whole point of going camping was to do stuff like cook and eat outside the tent. She’d also had enough of cycling and was not keen on the screeching racket the brakes on her bicycle kicked up every time she applied them. 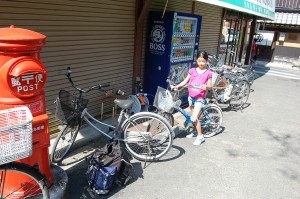 So, we turned back and headed down the hill, past the back of Miyajima Shrine, round the back of the Pagoda and stopped at a grocer’s shop on the corner of the back street to buy vegetables and provisions.

In the grocer’s we noticed some nice green apple-sized apples at a very reasonable price, something like 174 yen for three apples – a bargain, when you consider that these days one of those inflated apples costs nearly 400 yen at the Madam (no) Joy supermarket in Rakurakuen. So, a pack of three apples was added to our provisions, which we had to pile on the miniature shop counter as there were no baskets for the using of.

Eileen had the brilliant idea of adding a pack of cream stew stock to the provisions.

We then cycled back to the port, returned our bicycles and caught the bus back to the campsite, with the same fossilized dummy driver sat motionless in the driving seat.

At the campsite shop I stocked up on beer and Eileen wanted a pair of orange Crocs so she could kick off her training shoes.

Are There Orchards On Itsukushima?

Back at the tent we had a light lunch and a dessert of apples. The apples were delicious, the best I’ve had in Japan for a while. But how was it that they were so cheap when, usually, apples ferried over to an island from the mainland will be more expensive? Especially apples sold in a small corner grocer’s shop.

The question framed itself as a line of blank verse: Are there | orchards | on I-|-tsuku-|-shima?

I didn’t think so, but there might be; or perhaps the grocer has an apple tree in his garden; or perhaps they were simply cheap imports that he picked up at the market or from his supplier. So why can’t Madam Joy sell produce of similar quality and price? (Homework.)

Spent much the afternoon relaxing in a camp chair, reading Wolf Hall on the Kindle, drinking beer and snoozing. We went on a little trip across the park to look at the sea and restock on beer and snacks at the shop.

The wind picked up and began to whip up the waves as it came across from the mainland so we headed back to the tent. I thought the wind might continue to strengthen and so I added four more guy ropes and Eileen wandered around looking for some large stones to place over the pegs. The ground was quite hard and it had taken a lot of effort to bang the pegs in, but much less effort to pull them out again. We also unzipped the back flap (where we were storing our suitcase) to let the wind pass through the tent. In the end, the wind continued for much of the evening and gradually abated and our tent held firm throughout.

By early evening, the force of the wind had declined to a fresh breeze and so we were able to sit outside our tent and cook our dinner – a one pot vegetable stew which turned out to be surprisingly appetizing!

We also succeeded in lighting a candle and keeping it alight by shielding it from the wind with an assortment of packages and bottles, so there we sat in the candlelight enjoying the breeze and several helpings of vegetable stew.

They say the simple things are best, and camping on Miyajima is definitely one of the simple pleasures of this life.