A tanka consists of five lines consisting of a total of 31 syllables in a 5, 7, 5, 7, 7 pattern. Because the poems are short, the whole poem can be fitted onto a playing card, complete with an illustration of the poet and the poet’s name.

The game appeared several centuries later after the arrival of Portuguese merchants who introduced the Japanese to playing cards.

Uta garuta used to be a popular game for the New Year holidays in Japan. Generations of Japanese people have learned the poems of the Hyakunin Isshu, and even today, they are still taught in many Japanese schools.

When I discovered uta-garuta, back in the early 1990s, I became interested in the idea of creating an English language version, using verses drawn from the canon of English poetry. A couple of challenges immediately become apparent.

First of all, even relatively short English poems are much longer than Japanese tanka so it would not be practical to fit a complete poem onto a card. Instead, a single verse, or perhaps just a few lines of a chosen poem would have to be selected.

Secondly, English poems come in many different forms and styles. Would it be better to restrict an English uta-garuta set to one genre of poetry, such as love sonnets, or should the game draw on a variety of poems to cover a wider spectrum of English poets?

I never got any further with the idea, but I am pleased to report that the idea of an English uta-garuta deck occurred to somebody else with more passion and determination to see it through, and now we have the Ogoola Karuta deck, created by Aya Hasegawa-Feurst, which I will review in the rest of this article.

Probably the easiest way to start designing an English uta-garuta set would be to draw up a list of famous poets who should be included, which is how I imagine Aya Hasegawa-Feurst got started with the Ogoola Karuta deck.

The box sleeve informs us that Ogoola Karuta is,

all of which is true, but our Scottish friends may be miffed to see that they have been overlooked, although William Dunbar (1460-1520) and Robert Burns are included in the collection.

The catalogue of fifty poets represented in the set is wide ranging and, for the most part, impressive. It runs from Geoffrey Chaucer “the father of English poetry,” who was writing in the fourteenth century, up to Henry Wadsworth Longfellow, writing in the nineteenth century. The aim has clearly been to include as wide a compass of poets and poetic styles as possible, from the gentle Herbert to the scabrous Swift.

Aya Hasegawa-Fuerst has been careful to include a couple of fifteenth century poets, Dunbar and Skelton, who may be less familiar to modern ears, so there is no “yawning gap” between Chaucer (14th century) and Wyatt (16th century).

It took me a while to find a poet who was NOT there. The major Elizabethan and Jacobean poets are represented, as are the big guns of the early Romantic period. What about Sir Thomas Wyatt? Present! Edmund Waller? Present! The Earl of Rochester? Present! (Hurrah!) Alexander Pope? Present! Elizabeth Barret Browning? Present! Robert Browning..? Absent! Perhaps it was judged that two “Brownings” would be one too many. Tennyson, too is absent.

American poets are well represented, including Poe, Thoreau, Emerson, Longfellow and the Puritan poet, Anne Bradstreet, one of just three female poets present. Emily Bronte is included, but Emily Dickinson has been omitted, which is a pity.

Given those omissions, the inclusion of Chidiock Tichborne (1558-1586) seems somewhat forced. Tichborne, executed for treason as a conspirator in the Babington plot against Queen Elizabeth, left behind no more than three poems, of which the Elegy is by far the best of so slight a corpus, and I certainly appreciate the appeal of its poignancy. Even so, I would perhaps have dropped Tichborne for Dickinson; there would be no loss of poignancy, and the addition of a much more accomplished poet. 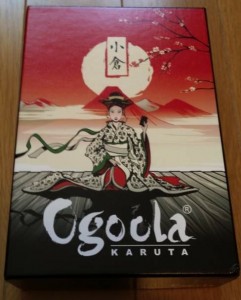 The Ogoola Karuta set is attractively packaged in a way that will be familiar to admirers of Japanese karuta decks. The game box is protected by a cardboard sleeve.

When the sleeve is removed we discover an attractively designed box lid (right).

On opening the box we find a booklet which explains the concept of karuta, the rules for two games, a catalogue of the poets and verses included in the anthology, along with a bibliography and index.

The game cards themselves are larger and thinner than standard Japanese karuta cards. My guess is that both production costs and considerations of design militated against the use of thicker card stock.

Japanese uta-garuta cards include a portrait of the poet on the reading cards, which adds to the delight of the game, even if the portraits are no doubt entirely works of imagination and not based on any known likeness of the poet.

In contrast, the Ogoola Karuta deck does not feature portraits of the poets on the reading cards. Instead, the lines of the poem have been printed in large format, with the first couple of lines or so printed in red and a couple more lines in black. The red lines of the reading cards are reproduced in an even larger, black font on the grabbing cards. 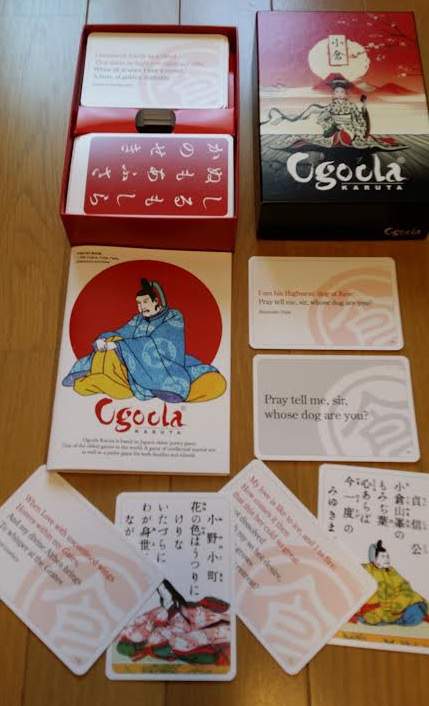 When I tested the game on the Japanese members of an English conversation class at a community centre in Hiroshima, they were able to locate the grabbing cards quite quickly, thanks to the large font, even when they did not understand the meaning of the lines.

One very nice feature of the Ogoola Karuta set is that there are Japanese uta-garuta card designs printed on the backs of the cards. Turn over the deck and you can play a traditional game of uta-garuta.

The kanji have furigana alongside them to help the card reader, and yes, every reading card has a portrait of a Japanese poet on it, just as you would expect!

Overall, I am favourably impressed with the Ogoola Karuta deck. I plan to use it in an English-Japanese Comparative Grammar class that I teach at a college in Hiroshima in the autumn term.

The game will appeal to anybody who loves English poetry and Japanese culture, and any crossover or exchange between the two.

Now that we have a first English karuta deck, I would not be surprised to see different versions appear on the market. How about an English karuta set dedicated to love sonnets and sonneteers, for example?

In the meantime, the Ogoola Karuta deck is available on Amazon.com for $47.00 (plus shipping).