The 7:45 train train from Itsukaichi to Hiroshima arrives at Itsukaichi at about 7:35. It comes from Hiroshima so everybody gets off which means that it is dead easy to get a seat – ideal if you are lugging a set of golf clubs during the morning rush hour… I was on my way to meet Jaime at Hiroshima and head off to Yoshina with him to play golf at the Misawa Setouchi Golf Resort.

Unfortunately, the Miyoshi-bound train was packed as was the platform so I had to cuddle my golf bag and push may way on. Jaime dropped his bag on someone’s foot. Still, after a couple of stops most of the sons of toil have got off and everything gets much easier – although I was nearly clobbered by an old geezer’s walking stick as he hopped up and down on and off the seat next to me, unsure of where he was.

We completed the final leg of the journey by taxi and shortly afterwards Jaime was whisking us off to hole no. 10 in the golf buggy.

Ah, well, the few golfers on the course today had been divided between the two halves of the course – and at this point I ought to explain that a Japanese golf course such as the Misawa Setouchi has a very pleasant feature, namely that it is divided into two 9-hole courses and that there is a lunch break between the two halves. The divided course also enables the management to divide the punters between the two halves which allows more punter per hour throughput – or on an uncrowded day such as today – allows the inexperienced punter to enjoy his golf without having a traffic jam of golf buggies full of competent golfers observing his every hack and slash…

The 10th hole was a par 4. Jaime teed off and sent his ball on a pleasing trajectory down the green, more or less straight. The Poor Little Cypriot also managed to clobber his ball on the first stroke and sent it on its way towards the yellow flag – which Jaime pointed out was not actually the flag on the green, but the half way marker. I note that I marked the score card with a cross which suggests that I was “forgiven” a shot. Anyway, I scored 6, a double bogey and Jaime scored 5, so not a bad start to the day. However, that was my best score of the morning! On the other hand, I only entered double figures (10) once.

I should point out that I only took up golf last year, played four games and spent a few hours at the driving range in Mitaki and had not touched a golf club since November 2005. I had intended to get some practice in at a driving range before our trip to Misawa… but didn’t get around to it. I had intended to drag my clubs out of the cupboard and practice my swing on the balcony… but I didn’t get around to that either. Finally, I thought I ought to consult my “Golf Swing” book – the one by that geezer who taught Nick Faldo everything he knew about golf – but I didn’t even get around to that! Actually, Tuesday morning while waiting for the kettle to boil I DID pull the book off the shelf to read over breakfast, but didn’t manage to open it. I did look at the cover and admire the author in his check golfing trousers. It seems that golfing gives chaps a licence to wear outrageous gear. I did not have anything outrageous in the trouser department to offer the world, but I was rather pleased with my natty combination of a blue striped golfing shirt (arms too short) and a natty sleeveless jumper that the aged matriarch knitted for me a few years ago.

But that’s enough about me. How did Jaime perform after his golfing adventures in Northumbria? He scored a bogey, bogey, double bogey, par, par, bogey, double bogey… then a major club-throwing balls up and finally a double bogey in the driving rain that started up on the 16th or 17th (our 7th or 8th) hole.

How sweet it is to be able to putter back to the club house after a nine hole hack and relax over lunch. 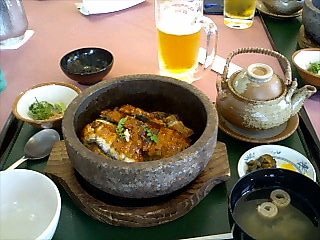 We both went for the eel baked on rice in a stone bowl option, which proved to be a winner – especially for me as Jaime doesn’t like miso soup so I got double helpings. Anyway, this baked eel on rice business is well worth burning your hands on the piping hot stone bowl for… After you have consumed about half the contents you take the accompanying teapot and pour the contents – Chinese tea – over the remaining rice and eel, then add japanese horseradish and spring onions (if you are not allergic to them) and voila! you have converted your meal into a delicious eel-n-rice ochazuke. Naturally, it was washed down with a cleansing beer although we had rededicated ourselves to the Lenten fast but two days ago…

The wind had got up to near gale force over lunch time but it had abated somewhat for the second innings (if that is the word). The afternoon’s play rather declined from the stirling exertions of the morning… Jaime’s first shot was not too hot, but my first lurching swipe sent the ball off low to the left for about 10 yards… and it took nine more swipes and perhaps a kick or two to get the damned ball into the hole.

It just so happened that a couple of workmen were – well, working, or pretending to down in the dip where the lake that lay between the tee and the green was being drained. It was a par 3. All you had to do was pop the ball over the lake and onto the green… Jaime plopped his ball into the mud – or rather, if I remember rightly, it landed on the other side of the lake and then rolled in! What was that chortling sound from down in the valley? My method on these par 3 wallop-your-ball-across-the-bally-valley type holes is to play my own game my own way and pull out the driver. As things stand, if I wallop the ball straight with the driver it only goes about 130 yards anyway – perfect for a par 3 hole! However, SHAME caused me to avoid that option before the faces of the workers down below, so I pulled out a trusty iron – number 5 perhaps… and sent the ball rolling down the bank – but NOT into the lake!

My next shot was pulled off with a casual air that enabled me to make out that it had all been intentional – the good old no. 9 iron sent the ball over the lake and onto the green – well, it was on the green momentarily, but rolled off and into a bunker. It took five more wretched shots to get the ball from the bunker to the hole…

Hole no. 3: Another water obstacle. Jaime’s ball went soaring over the obstacle and off to the right somewhere. I clobbered my ball with the old driver and it went low and as it went I said to Jaime that it would bounce off the water – and bounce it did! It almost made it onto terra firma but, cruelly, it hit the top of the bank and bounced back into the water.

The lake feeds into a little stream that runs much of the length of the fairway and then crosses it at the approach to the green. My second shot, from the second tee, went straight and true – and straight into the stream where it crosses the fairway.

We stopped for a cleansing beer after the fifth. There is a little refreshements shop with a stunning view of the Inland Sea that you can enjoy while sat at the bar.

On six of the nine holes my score was 9. However, the dismal run was broken at the 7th, a par 3, with a brilliant demonstration of the Hurley speciality – drive the ball across the valley and straight onto the edge of the green 170 yards away! Any competent player would use an iron but what the heck, I was on the green for a possible BIRDY!! Ah, but the first nervous putt was under hit, the second one was over hit and the third went in, so I finished one over – nevertheless “4” was my best score of the day. This was also the only hole where I beat Jaime and I was most impressed with the distance he hurled his no. 10 iron out of the bunker. 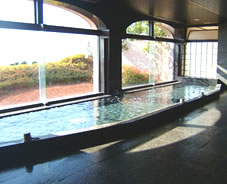 The rain and the wind came and went and came back again… but no matter – when a wonderfully hot hot spring bath awaits you back at the club house.

Back at Yoshina station a train done up with fixtures and fittings like an old boat – complete with porthole windows and so forth took us part of the way back to Hiroshima.

A fine day indeed – and I am sure that I really want to practice more in future… My target: Get my score beneath 120!