I met old Ardle for lunch on Monday.

We went to one of the Italian joints on Namiki Dori where, in Ardle’s own words, he is “known”. Known for what may be another matter. He spent most of lunchtime chatting up the waitress who used to be one of his – but I ought to leave that side of things to him over at his not recently updated [and now defunct – ed.] blog.

Somehow his chatting up of the waitress convinced the Italian chef that he was a practitioner of the Greek vice, but, as I say, I ought to say no more.

That was a pretty epanalepsis though perhaps a nice anadiplosis might be more pertinent.

Old Ardle ordered straight off the menu while the Poor Little Cypriot made do with the set course of the day. Mind you, when Old Ardle saw several dishes being served up on my side of the table and when he learnt that coffee was thrown in he turned his natural colour, which is to say green about the gills. He had the front to ask the maiden if she couldn’t have one thrown up his way too. We thought he had scored a maiden, but at the end of the meal it turned out that he was served coffee, cake and ice-cream in equal portion to mine. Mind you, while I thought it meet to tuck into the portion that was available Old Ardle continued his sally in her direction while his ice-cream melted and his coffee turned cold.

We retired to the BF Cafe and spent the rest of the afternoon locked into a game of GO. We began at 3pm and play continued until about 6:30. Utterly exhausting.

Old Ardle gradually reverted back to his former snail’s pace but it didn’t matter particularly. Gradually a large section of his forces appeared to be on the verge of being annihilated when the PLC whipped off to the gents. He returned 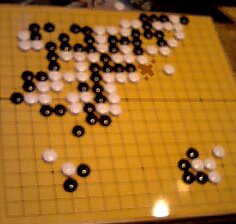 to his seat and Old Ardle lethargically extended his line. The PLC immediately laid his tile alongside thinking he was keeping up the pressure which would lead to inevitable encirclement. However, the break had broken his concentration and he had neglected to secure a vital group of stones. Old Ardle perked up as he couldn’t believe his luck, and took the stones and relieved his flank.

Now the remarkable thing about all that is that it was now the PLC who was on the defensive and having to shore up a front that looked about as secure as the Oder Front in April 1945.

In spite of that, the great offensive did not materialize. An enemy landing took place in one corner, but gradually the PLC somehow managed to re-encircle Old Ardle’s main force. The result was a game in which numerous stones were removed by both parties but in the end victory went to the PLC by a margin of about 20 points, which is the narrowest yet. But it is still victory so I shall take it, thank you very much.