Saturday afternoon in Hiroshima. Old Ardle and I lounge in the BFCafe over coffee and a game of Go. Ardle has decided to play with unaccustomed celerity while discussing, among other things, equestrian matters. Firstly, OA climbed upon one of his hobby horses (a silly filly called “Do You Know The Classics?”) but had hardly straddled the pole when he was unseated and deposited in the mire by an outlandish assertion that Cicero came unstuck because of his support for Caesar or something. Cicero, the Pater Patriae who, with Cato the Younger, put down the Catiline conspiracy and had the conspirators hanged, Romans though they were, for seeking to make a king of Catiline.

After that little misadventure we went for a canter where the going was firmer and Old Ardle more confident in the seat, for he confessed to having had some experience riding dark horses while the PLC kept a tighter reign on his tongue and said that he was not sure that he should even if he could.

So while those two are riding their hobby horses and jousting black against white across the Go board I shall take a moment to supply some links to a couple of not entirely unrelated UK news stories that are of much moment for latter-day Ciceronians.

“The far-right British National Party (BNP) has become the focus of media attention once again, following the broadcast of the BBC’s undercover documentary The Secret Agent.

“The documentary is the product of a six-month investigation by reporter Jason Gwynne, who infiltrated the BNP and then covertly filmed its members expressing just the sort of moronic, bigoted opinions over a drink that you would expect them to.

“While the results of Gwynne’s investigation may not be surprising, it is now being suggested that some of the BNP figures featured in the documentary should face prosecution, especially since two of them appear to confess to forms of criminal assault and intimidation.

“It is legitimate that these possible crimes should now be investigated, having been brought to light by Gwynne’s documentary. More dubious is the suggestion that BNP leader Nick Griffin should also be subject to some form of prosecution, for being filmed calling Islam a ‘vicious wicked faith’ – something which, in a free society, he should surely be entitled to say.

“Griffin has protested that ‘it’s still not illegal to criticise Islam’. In principle he is right – though given the recent introduction into law of concepts such as ‘hate speech’, ‘hate crime’ and ‘incitement to racial hatred’, it is debatable whether he is right in practice. Incitement is an especially woolly category that conflates speech with action, and which can be used to pursue censorious agendas. The response to the BBC documentary suggests that many today make little distinction between words and actions, and believe that the expression of certain views should be as punishable as committing a violent act. The consequences for freedom of speech are as obvious as they are worrying.” Spiked

“He was acquitted of one of each charge in relation to one speech, but the jury failed to reach a verdict in respect to a second speech in which he called Islam a “wicked vicious faith”. “His colleague denied four charges of using words or behaviour intended to stir up racial hatred and four of using words or behaviour likely to stir up racial hatred. “He was acquitted of four charges – two of each – in relation to two speeches made at The Royal pub in Pudsey and the Falconer’s Rest pub in Morley, in which he described asylum seekers as ‘a little bit like cockroaches’. “The jury failed to reach a verdict over two other speeches, in one of which Mr Collett said ‘let’s show these ethnics the door in 2004’. BBC

“The rights to freedom of speech and association are fundamental to a free society. So far as these rights are diminished, that society becomes less free. I was born in a country where these rights had been enjoyed for centuries. I have reached middle age in a politically correct police state where the Government is now trying to silence its opponents through the courts. Particularly under Tony Blair, this country has become a more genteel version of Zimbabwe. [Ebagum Gabb, tha got carried away wi’ thyself and I don’t think Blair is owt like Mugabe. Ed.]

“Doubtless, there are people who take offence at the expression of certain views on race and immigration. But free speech that does not include the right to give offence is not free speech. It is the political equivalent of decaffeinated coffee.

“If people are upset by what they read or hear, let them ignore it or argue against it. There is no place in these debates for the Thought Police.”

Another Director (how many do they have?), Dr Chris Tame, commented on the decision of two UK banks to close BNP bank accounts:

“Although there is no group in Britain more opposed to EVERY aspect of the BNPs overt and covert agendas – its welfare statism, its socialist economics, its crackpot anti-monetarist currency views, its environmentalism, its social, political and sexual authoritarianism, its paternalism, its racial collectivism, its anti-free trade and anti- globalism, and its opposition to the free movement of goods, capital and labour – the Libertarian Alliance opposes both HSBC’s and Barclay’s decision, and the growing demands for the expulsion of BNP members from the civil service, the police, teaching or other professions.

“What can be done to the BNP can be done to any group. As the great Jewish libertarian philosopher Ayn Rand said: ‘In the transition to statism, every infringement of human rights has begun with the suppression of a given right’s least attractive practitioners. In this case, the disgusting nature of [those concerned] makes it a good test of one’s loyalty to a principle’.”
BNP Case Treads a Fine Line

What Now for the BNP?

2. The Enemy Within – Outfacing the Militants

Then there is the little case of the face. If you would like to publish a picture of Muhammed wearing a fizzing bomb for a turban militant Muhammedans would like blow you up.

At the very moment, perhaps, when Nick Griffin and Cockroach were celebrating the fact that an English jury is still, even today, unwilling to convict a fellow for expressing opinions or coining turns of phrase considered by some, or even by many, or even by the vast majority, to be odious and offensive, there were cloaked and bearded shepherds in our land inciting their flocks to march with placards calling for holocaust, beheadings, slayings and various forms of death in general to be administered with extreme prejudice against anybody who would publish such cartoons. Their freedom to do this was protected by a cordon of policemen, all I suppose turning a blind eye to the various incitements to kill, slay, and behead. 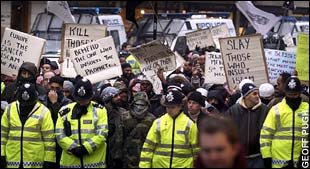 I understand that a policeman at the scene was diligent in his prosecution of a driver who had illegally parked his car. “Well, Police Constable, I understand that I am infringing the letter of the law over here by parking my racialist opinions on this restricted area. I did not know it was a one-way street. But, I say old chap, what about those gentlemen that are being protected by your colleagues over there? Are we free to take our vile opinions out for a spin around the streets like that barbarous mob of worthy orientals, my good Sir, or not?”

The CPS should either drop its case against Griffin and Cockroach or collar this lot as well.

The Press Should Be Free To Ridicule Islam – Spiked-Online

Gentle John Simpson of the BBC writes that:

Cartoon Anger is a Misrepresentation

Good old Wikipedia has an excellent page on the whole story here:

Finally, a Wikipage on Toleration. Toleration, correctly speaking, is an aspect of the virtue of Prudence, fitting in times of peace but overruled by stern Necessity in times of war. Because Tolerance is a prudential consideration it involves calculating the balance of good to be gained by permitting or not permitting an obnoxious practice (such as inciting others to kill, behead, slay those who exercise freedom of expression without inciting others to kill, behead, slay). For more on Prudence, read Cicero.

By now our little game had ended in farce. Old Ardle had not commited his white stones for over half an hour – he had, as it were, gone into self-imposed exile on Saddo Island for his disgraceful performance on the battlefield, which he, like the Corsican Tyrant, licked and legging it from Waterloo, blamed entirely on the precipitous charge of the cavalry. 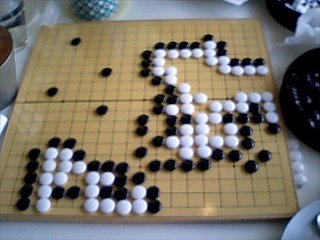 We began a new game, which looks more promising, and we concluded that it is a Mad World My Masters and that it would be a much better place if there were more people like us in it, and perhaps like H. G. Wells too, who could be a bit of a bore at times but who wrote that book “Little Wars”; chaps you can depend upon not to muddy the waters, or poke their noses into whatever is none of their business, and we are quite amenable too to good eggs of all shades from insipid Lightfootian pinko-grey to darker-than-a-dark-horse dark; Desmond Tutu in a tutu too, and golden people of all sorts of opinions as Macbeth said; we’ll able ’em all, but I pray, be not frantic or zealous overmuch, no, no zealots thank you, no, nor door knockers neither, and no gainsayers, but good chaps, quite happy to sit in their saddles all afternoon and resolve their facile conflicts over a game and some liquid refreshment and not mind if they don’t go out and air their imbecile hatreds on the street; chaps like Pascal who said with a pleonastic flourish

“I have discovered that all human evil comes from this, man’s being unable to sit still in a room.”